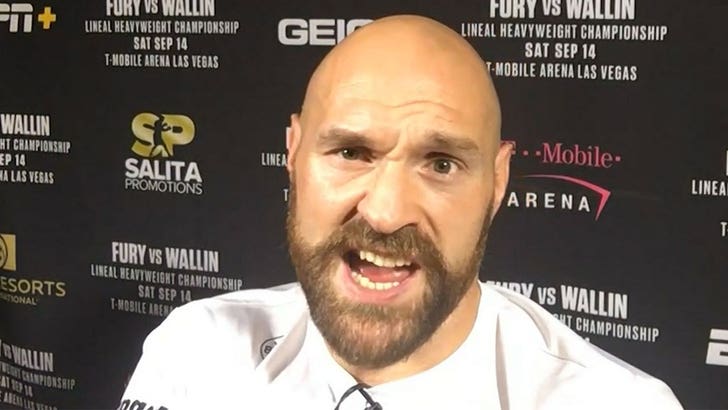 Tyson Fury says he doesn’t give a DAMN about money — telling TMZ Sports he’s not boxing for the paycheck because he’s never met one single happy millionaire.

“I know a lot of millionaires and I don’t know one happy one. Not one,” Fury said.

“They’re always unhappy because they’re searching for more. Material stuff or money will never make a man happy. Man has got to find happiness deep within his soul.”

So, why are we talking money with Fury?

He’s fighting undefeated Otto Wallin on Saturday — and if he wins that fight, Tyson says next up is a rematch with Deontay Wilder … which comes with a MASSIVE PAYDAY.

But, Tyson tells TMZ Sports the money ain’t the motivator … it’s deeper than that.

Fury continued, “It’s not about money at all. When you’re comfortable in your life, what do a few zeroes mean really anyway?”

“Money’s one thing, but you’re talking to a KING — El Rey de los Gitanos!! I am the Gypsy King! The real official Gypsy King!”

Fury says he has millionaires and billionaires lining up to be his friend because they want to be close to greatness … but he doesn’t care because money can’t buy happiness.

“Life isn’t all about money. Life’s about love, passion and being happy. And, if we can do that, if humans can ever do that, then we’ve cracked it!”

Illegal BASE Jumper Gets Parachute Stuck On Cell Tower