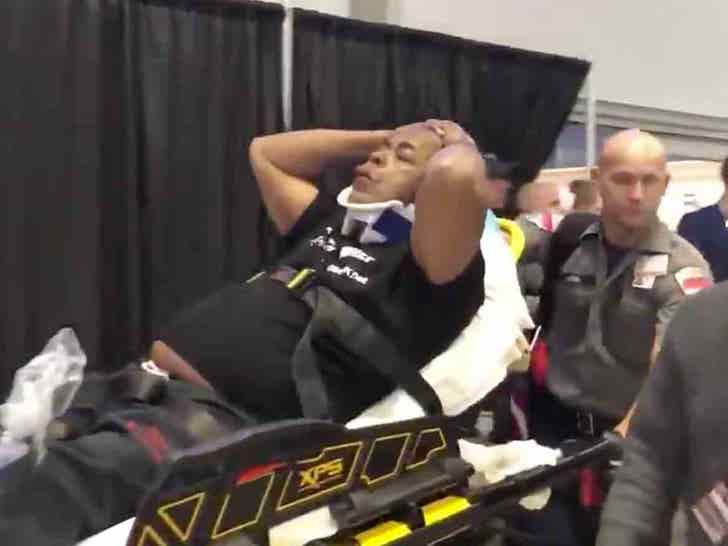 Madness at the weigh-in for the highly anticipated Claressa Shields vs. Ivana Habazin fight — when Habazin’s trainer was hospitalized after being sucker punched at the event.

James Ali Bashir was laying in a pool of his own blood after someone snuck up and socked him in the face HARD at the event in Flint, Michigan.

Emergency personnel raced to the Dort Federal Event Center to treat Bashir — who was wheeled out of the facility on a stretcher while wearing a neck brace. Video was captured by FOX 66’s Jonathan Deutsch.

Here he is on the stretcher, leaving the arena. #Boxing #ShieldsHabazin pic.twitter.com/8GnWBu0Wtx

Bashir is well known in the boxing world — he worked under legendary trainer Emanuel Steward for 17 years and worked with guys like Wladimir Klitschko.

Cops have taken the suspect into custody but so far, that person’s identity has not been revealed. There are rumblings the attacker was someone connected with Shields but so far, that has NOT been confirmed.

Shields was set to fight Habazin on Saturday night in the main event fight on Showtime. No word on the current status of that fight.

Shields issued a statement on social media … saying, “I wanna thank everyone who came to weigh-in to support me. Because of the incident that took place, they had to clear the Dort federal for safety issues.”

“But I made weight 153.8 video should be out soon. And prayers for Ivana Coach. God speed.”

PROJECT BLUE BEAM? Was Nasa test to prepare us for ‘alien UFO invasion’?

What on earth! Photograph of mystery ‘SQUARE AIRCRAFT’ sends UFO enthusiasts into frenzy