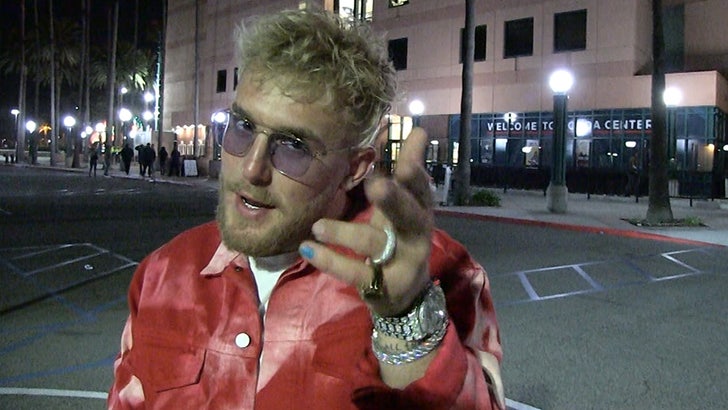 Jake Paul says his team is actively in talks with KSI‘s people to make a boxing super-fight happen … but tells TMZ Sports he thinks Logan‘s foe is too chicken to get in the ring!!!

Of course, the younger Paul bro has vowed revenge following Logan’s controversial loss to KSI back in November … and now that he bulldozed his way past AnEsonGib, there’s only one fight to make.

We spoke with JP about his fighting future … and he sees another easy W coming at the hands of KSI VERY soon.

“Our teams are talking,” Jake tells us. “I’m telling you, I’m gonna knock this kid out in the 1st round,” he said. “I have to avenge the family name.”

Jake even adds a direct message for KSI, saying, “I know you’re going to be watching this. Stop being an embarrassment. You said you’d fight me and I embarrassed your friend, who you said was gonna beat me. I think you have to take this fight.”

Jake believes his words are gonna fall on deaf ears though .. saying KSI watched his fight and realized Paul might be too skilled in the ring now.

“I think deep down, (he) saw my performance and is like, ‘wow, do I really need to like risk this? I can just YouTube and make shitty music.’ That’s what he’s thinking.”

As for a fight date?? Jake makes it clear he doesn’t wanna waste any time — he says he’s down to scrap right now!!