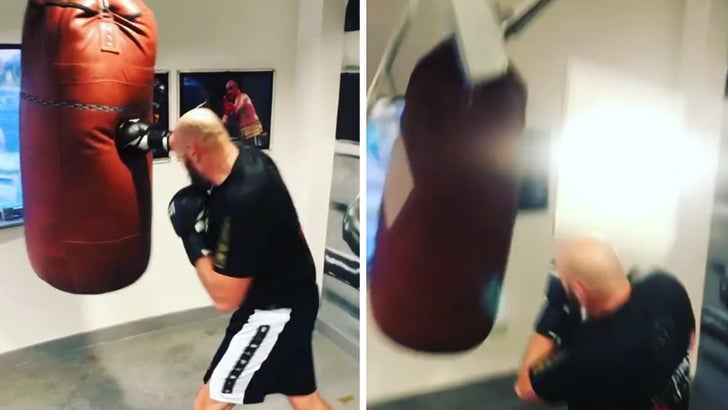 Tyson Fury‘s newest training sesh literally brought the house down — as the ceiling collapsed while the heavyweight champ was annihilating the heavy bag!

… and the video is pretty great!!

The Gypsy King is gearing up for a fight with undefeated German star Agit Kabayel (reportedly happening in early 2021) — and he’s been busting his ass in his gym in Morecambe Bay to get ready.

But, the 32-year-old took things to another level on Tuesday — when he rocked the heavy bag so hard, it looked like the sky was falling!

You can see pieces from the ceiling — where the bag was attached — came crumbling down on top of the champ, who tried to move out of the way!

At one point, you can hear Fury say, “That coulda come down and hurt me, ya f**kin’ idiot!”

Despite the collapse, Fury was still feeling an adrenaline rush and wanted to keep training — so he simply moved to another bag and kept punching!

After the workout, Fury said the workout was “fantastic” — noting he’s been “absolutely smashing it!”

Fury defeated Deontay Wilder in their rematch back in February — but they could face off for a 3rd time in 2021.

Fury has also expressed interest in fighting Anthony Joshua — which would be awesome.

In the meantime, call a handyman and fix that ceiling, huh?!

Watch Chrissy Teigen scream her way through a haunted house

Biden/Harris campaign heads to ‘Fortnite’ ahead of Election Day