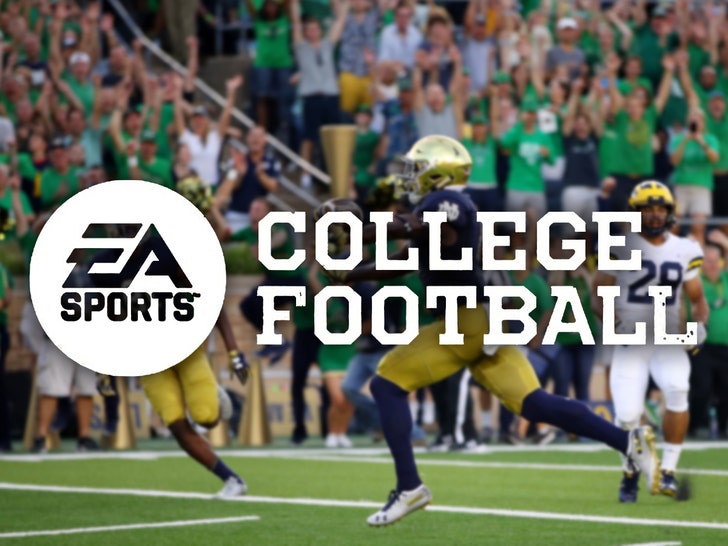 The Fighting Irish has announced it will NOT be a part of the new EA Sports NCAA college football video game … saying they won’t give the green light until it’s clear how players will be compensated.

The new video game, which was announced earlier this month, is the first EA Sports college football game since 2013.

When EA Sports made the announcement, the company said more than 100 teams would be in the game … however it would NOT include current rosters or images and likenesses of real college players.

At the moment, NCAA rules prohibit players from selling their NIL (Name, Image, Likeness) rights while they’re still in school.

But, Notre Dame says they won’t cooperate with EA Sports until there’s a plan in place for Fighting Irish athletes to be compensated fairly.

“Notre Dame will not, however, participate in the game until such time as rules have been finalized covering the participation of our student-athletes.”

The statement continued, “As those rules are developed, it is our strong desire that student athletes be allowed to benefit directly from allowing their name, image and performance history to be used in the game.”

ND head coach Brian Kelly also weighed in — saying, “We are here to support our student-athletes.”

“Much like we have empowered our players when it comes to providing a platform to speak on racial inequalities & social issues that are important to them, we must support them when it comes to NIL & the work that still needs to be done.”

It’s obviously a big deal — Notre Dame is arguably the biggest name in college football and has been for decades. The team finished the 2020 season ranked #4 in the country.

The question now … will other major schools follow suit — and if so, would EA Sports pull the plug on the game entirely … again?

This cheeseburger inside of french fries is the ultimate junk food