Adrien Broner Back Behind Bars Over 2014 Arrest 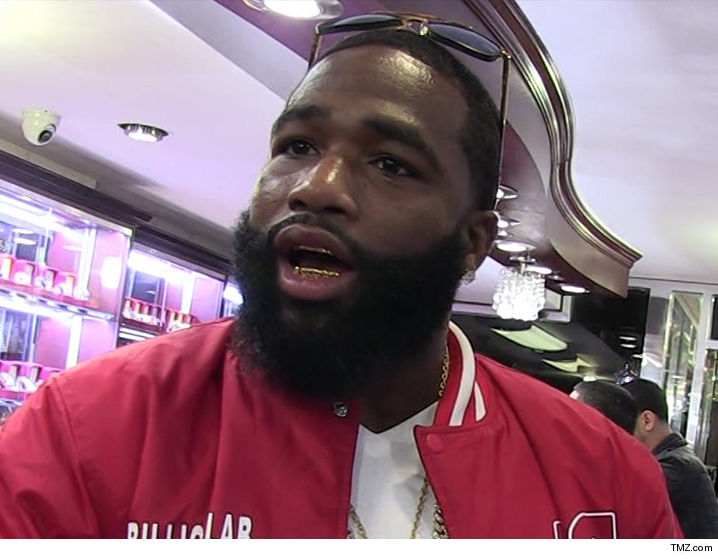 Adrien Broner will spend the next few days behind bars after pleading guilty to a misdemeanor charge from 2014.

As we previously reported, the boxer was arrested on April 20 in Kentucky on a warrant stemming from a failure to appear in court for a 2014 disorderly conduct case. While he was getting arrested, Broner told cops he had been shot at earlier that night.

According to Fox19, Broner just appeared in court and pled guilty to the disorderly conduct charge. The judge sentenced him to three days in jail, which he’ll start serving immediately.

Before he got locked up, Broner posted on Snapchat and said he was “pissed” about the sentence.

Russell dropped the Colombian challenger with a right uppercut in the third round and continued to dominate the action with his superior speed and skills.

The American sent Escandon to the canvas again following more hard shots in the seventh, and referee Harvey Dock stopped the bout at 59 seconds of the round.

Uzcategui outpunched Dirrell throughout the bout, and landed a three-punch combination, finishing with a left hook that dropped the American face first on the canvas in the eighth round. Referee Bill Clancy immediately ruled that the punch came after the bell. Dirrell was unable to continue and awarded the DQ victory.

Then a number of altercations took place in and out of the ring, including Dirrell’s uncle, Leon Lawson striking Uzcategui.

With the win, Dirrell is now set for a rematch with IBF champion James DeGale, who is sidelined because of injuries suffered in his draw with Badou Jack last January.

DeGale outpointed Dirrell for the vacant IBF 168 lb title in May 2015. Dirrell got knocked down twice and lost a unanimous decision. 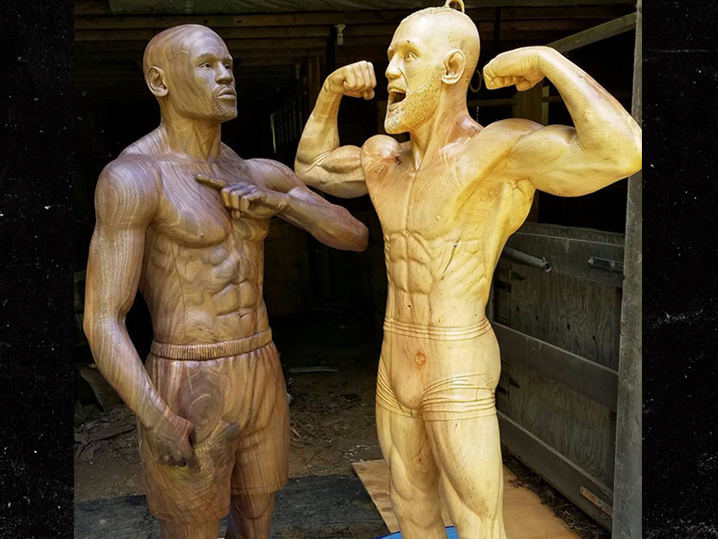 Floyd Mayweather hasn’t agreed to terms finalizing the super fight with Conor McGregor … but that hasn’t stopped the 2 superstars from facing off … as awesome wooden statues!!

The same sculptor behind the incredible Muhammad Ali and McGregor wood statues decided to add to his collection with a larger than life version of Floyd. 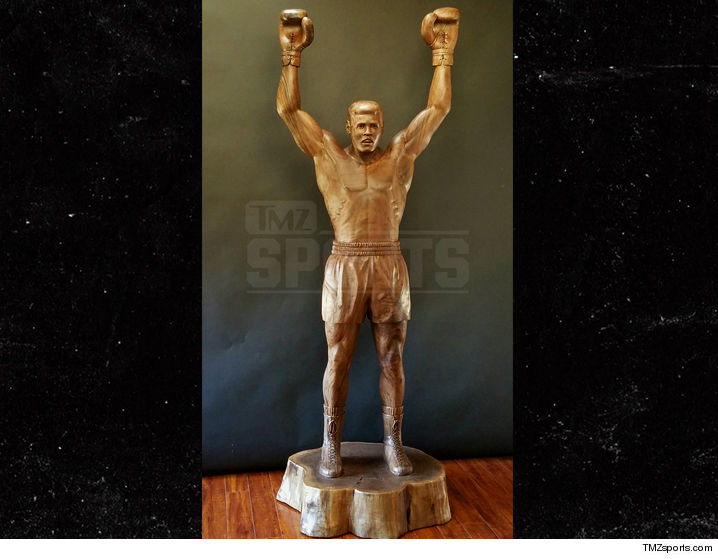 We spoke with James O’Neal, who says T.B.E.’s statue took about 5 months to complete before showing the three fighters off at the Atlantic City Boxing Hall of Fame ceremony this past weekend.

As for his next project, O’Neal says he’s keeping with the fighter theme and has already started working on a statue for MMA star Cris Cyborg. 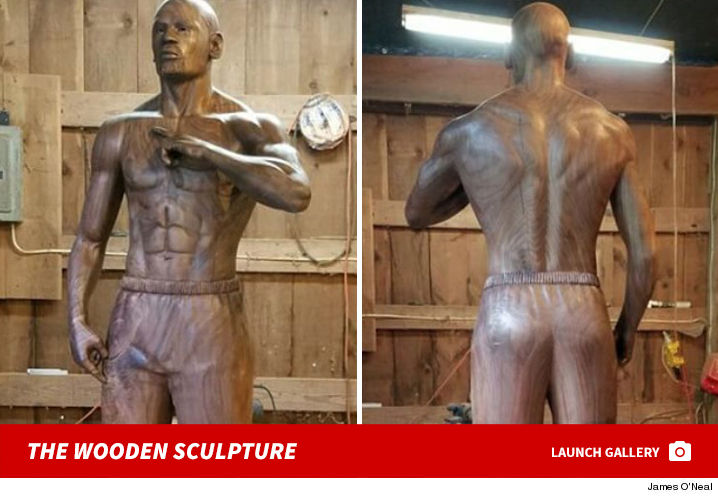 Inoue was too strong and fast for the Mexican from the opening bell. The Japanese puncher dropped Rodriguez twice in the third round and he was counted out at 1:08 of the round.

It was so surprising the way Melindo, not regarded as a hard-puncher, quickly put away Yaegashi, who is well-known for his toughness.

The unbeaten American landed blow after blow and Diaz’s eyes began to swell by the fourth round.

Diaz landed several solid shots of his own, but he could not sustain any attack because Crawford’s counter punching, holding and moving around.

In the later rounds, Diaz could no longer get any offence going due to vision problems – his right eye was almost closed and his left eye was swollen – and he was taking a beating.

Diaz’s trainer, Joel Diaz asked referee Steve Willis to stop the fight at the end of the 10th.

Crawford could next fight  IBF/WBA champion Julius Indongo in a 140 lb unification clash this summer. Then he is likely to move up in weight for a mega-fight with Manny Pacquiao at welterweight.

Spain’s Martinez had his moments, but the home favourite was the busier and doing the cleaner work throughout the bout.

Warrington retained his WBC International featherweight title for the third time and remains on course for an eventual shot at the WBC featherweight title. Current WBC titleholder Gary Russell Jr defends against Oscar Escandon next weekend.

Keith ‘One Time’ Thurman Undergoes Elbow Surgery … Out for Months 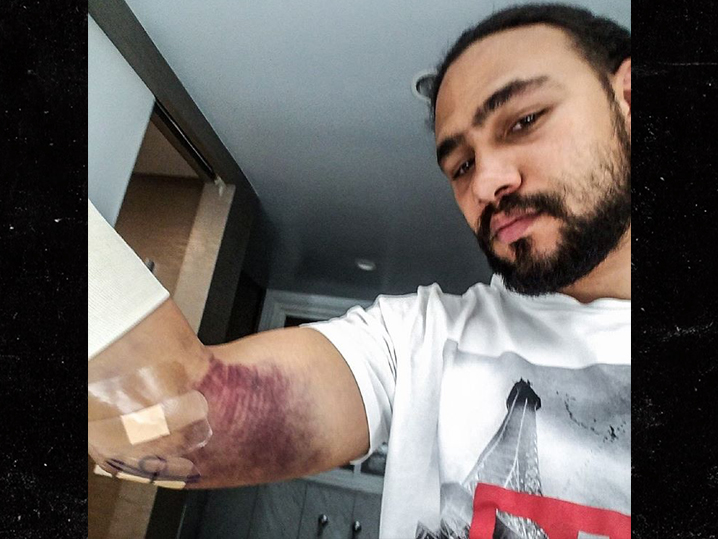 Boxing superstar Keith “One Time” Thurman will have to wait a little while for that huge money fight he’s been calling for … after undergoing elbow surgery that will sideline him for months.

Thurman has revealed he went under the knife in April to remove calcium deposits from his right elbow — a situation he was dealing with BEFORE his epic March 4th throwdown with Danny Garcia.

The 28-0 fighter still appears to be bruised up from the procedure — but says he hopes to be fighting again by the end of the year.

We got Thurman out right before the surgery in April and he told us he’s still gunning for a marquee bout with a huge star like Manny Pacquiao.

He’s also down for a rematch with Garcia. We’re down for that too.

Previous champion Luis Concepcion was stripped the day before his fight against Yafai for failing to make weight.

The Briton dropped Muranaka in the second round with a left-right combination as he got the better of the Japanese challenger in the early rounds.

But Yafai, who was deducted a point in the eighth for low blows, had to battle hard in the later rounds due to the constant pressure from Muranaka.

Eggington outpunched the Spaniard in most of the rounds before a right uppercut followed by a huge left hook knocked Rodriguez through the ropes.

Rodriguez remained down and the referee immediately waved off the fight at 1:03 of the 10th. 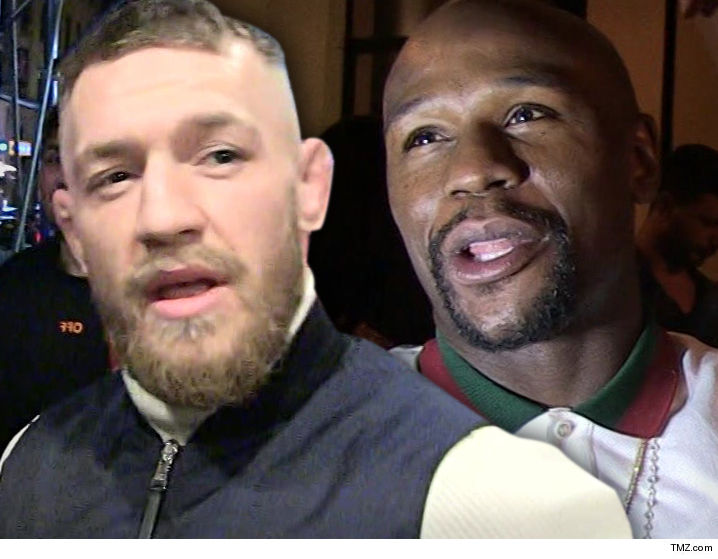 Conor McGregor‘s deal is in place to fight Floyd Mayweather — now, it’s up to Dana White and the Mayweather camp to nail down the other side.

The UFC superstar made the announcement late Wednesday night — saying he reached an agreement with his UFC bosses that shores up how he will get paid if he steps into the ring with Floyd.

Conor has said the deal he was eyeing will pay him around $100 million.

Floyd has said he wants double or triple what Conor gets. It’s up to Dana White to now hammer out a deal with Mayweather and his manager, AL Haymon.

McGregor issued a statement on TheMacLife.com saying, “It is an honour to sign this record breaking deal alongside my partners Zuffa LLC, The Ultimate Fighting Championship and Paradigm Sports Management.”

“The first, and most important part of this historic contract has now officially been signed off on. Congratulations to all parties involved. We now await Al Haymon and his boxer’s signature in the coming days.”

Conor is clearly confident the two sides will reach a deal soon — because he was shopping for yachts last night … and he posted a pic with Conor Jr. saying, “let’s go get some boxing ones now son.” 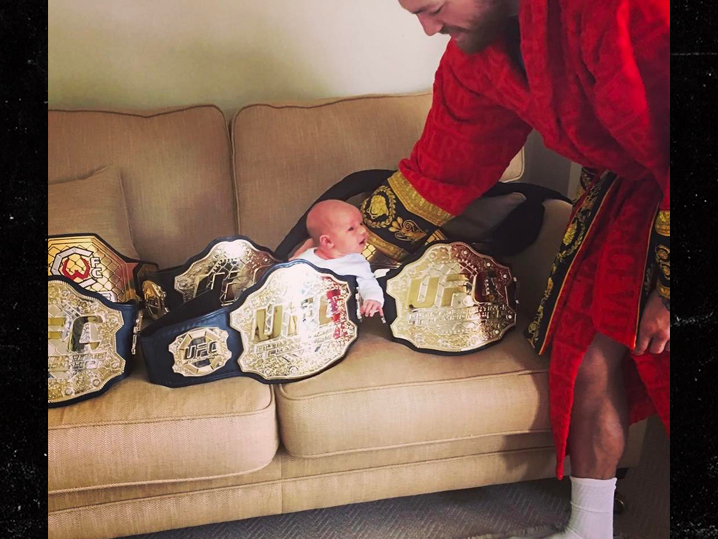 The Irish mixed martial artist has agreed a deal with UFC president Dana White to meet the American in a boxing match and now says, it’s up to Mayweather to make the megafight happen.

“The first, and most important part of this historic contract has now officially been signed off on,” McGregor said in a statement to Themaclife.com.

“Congratulations to all parties involved. We now await (Mayweather’s adviser) Al Haymon and his boxer’s signature in the coming days.”

McGregor did not specify on the terms of the deal.

“The McGregor side is done,” said White. “I’m starting to work on the Mayweather side now.

“I’m not saying the fight will happen, but I’ve got one side done, now it’s time to work on the other. If we can come to a deal with Haymon and Mayweather, the fight’s gonna happen.”

Mayweather retired from boxing in September 2015 after equalling Rocky Marciano’s unbeaten record of 49-0.

“There’s only one fight that makes business sense,” Mayweather said on Wednesday. “I came out of retirement because I’m a businessman and I want to give the world what they want to see.

“McGregor’s a fighter. I’m a fighter. This is what the fight fans and MMA fans want to see.”

If you’re still alive, snap up the hottest products from the Black Friday sales